1980, Led Zeppelin kicked off their Tour Over Europe 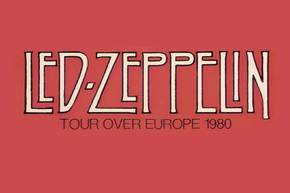 Today in 1980 Led Zeppelin kicked off their Tour Over Europe at the Westfalenhalle in Dortmund, Germany.

Tour Over Europe, 1980 was the final concert tour the English rock band performed. It commenced on 17 June and ran through till 7 July.

Ten of the shows on the tour took place in cities throughout Germany, as well as one show each in Brussels, Rotterdam, Vienna and Zurich.